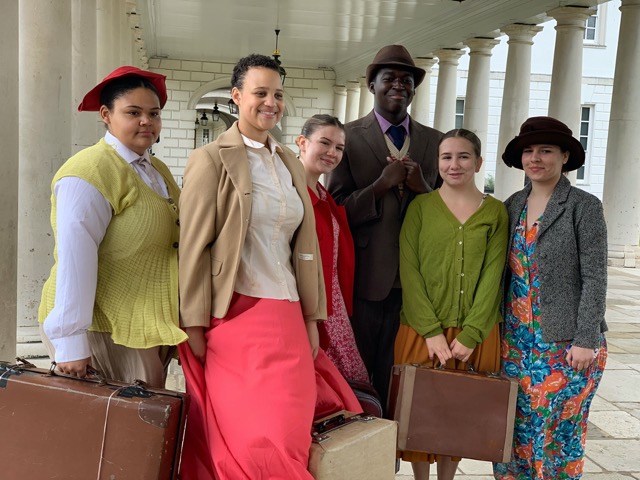 On Tuesday 22 June, Level 3 Performing Arts students at Lewisham College collaborated with Royal Museums Greenwich to showcase a dance and spoken word performance at Queen’s House to commemorate Windrush Day and celebrate the contributions the Windrush generation have made to society.

Windrush Day marks 73 years since Caribbean migrants arrived at Tilbury Dicks in Essex on the ship Empire Windrush to fill labour shortages created by the World Wars. Their sacrifices helped reconstruct the economy, infrastructure and the health service of Britain and brought elements of Caribbean culture to the UK.

The performance depicted the ‘Windrush Scandal’ and portrayed the moment that migrants arrived as British citizens but were not provided with documentation to prove this and were later required to verify their citizenship when laws changed, leading to deportations, loss of healthcare, housing and more.

"Working with Lewisham College has given us a chance to not only engage with the locality, but to capture the imagination of young creatives and introduce careers in heritage sectors as a professional path. We hope that this event has opened their eyes to the multitude of possibilities ahead and we look forward to future collaborations with the College.”

The performance gave students the opportunity to gain experience of performing professionally on a heritage site whilst learning about learnt about the history of the Windrush generation and the ensuing scandal. They were able to explore characters, capturing the excitement, fear and disappointment felt by these migrants on their journey from the Caribbean to England.

Athena Rose, Level 3 Performing Arts student said: “Taking part in this event helped bring to life the lives of the Windrush generation and their emotions throughout their voyage to the UK. This opportunity helped me become more adaptable and made me look outside my own bubble of experience, which has helped me grow as a performer and as a person.”

The spoken word piece was inspired by the artwork ‘Whose Government’ by Deanio X and Nathan Bowen, which shows the ship Empire Windrush approaching British shores and being met with hostility from the Home Office. Students decoded this into a spoken word narrative, which was also performed at the event.

Find out more about Windrush Day on the Windrush Foundation website.