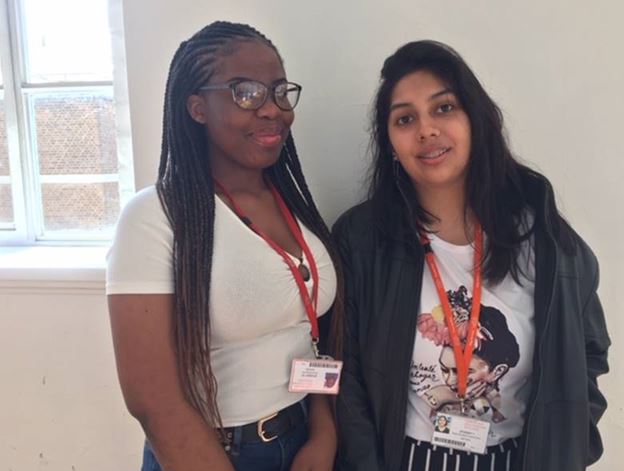 Rosa Ndong Osa and Helen Elizabeth Garcia, both studying ESOL GCSE at Lewisham College, have co-written a ground-breaking drama which is being performed to mark the fifth anniversary of the fatal stabbing of James Hunter in Sydenham.

‘SAFE’ was staged by Spontaneous Productions at the TNG Youth Centre in Sydenham on Friday 31 May.

Helen and Rosa wrote the play as part of a workshop held at the College, and saw their work brought to life by a professional cast. ‘SAFE’ explores the pressures on young people and shows what can happen if they make the wrong – or right – choices. It centres on Jacob, a motivated young man who is heading for university when his girlfriend becomes pregnant. As pressure builds, he is faced by a difficult decision: should he work hard and go to university or take the easy road to gang life for some quick cash? Aimed at challenging expectations about London’s youth, ‘SAFE’ is part of a James Ross Hunter Youth Support Organisation (JRHYS) event which included music, dance and spoken word contributions from young performers. There were also a range of activities including arts and crafts, a bouncy castle, food by the RTG Kitchen and music by DJ Tease, as well as the launch of Five Years Later by Collet Hunter about the loss of her son. Tutor Francisca DaGama concluded: “We are so proud of Helen and Rosa for their hard work writing this play and highlighting the very real choices young people face every day. These two students are a great example of the talent and dedication which young people have to offer, and I hope the audience of ‘SAFE’ take away a positive message of hope for the future.”